What I’m Reading #5: Books I Read This Spring

So my lovely new laptop arrived and I’m now ready to commence with blogging.

I thought I’d start with a little update on what I’ve been reading these past months. Altogether, I’ve read about 25-30 books, but these are the ones I completed.

Listed, they are:
The Four Loves by C. S. Lewis
Nineteen Eighty-Four by George Orwell
Nine Stories (aka For Esmé—with Love and Squalor) by J. D. Salinger
The Catcher in the Rye by J. D. Salinger
Oscar and the Lady in Pink by Éric-Emmanuel Schmitt
Matthew for Everyone–Part One by N. T. Wright
Searching for God Knows What by Donald Miller
Looking for Alaska by John Green
An Abundance of Katherines by John Green
The Little Prince by Antoine de Saint-Exupéry

Just about all of these books were first-rate reads and went straight to my list of favorites. I hope I can get around to blogging about about them, because I have so much to say.

Going back to what I’d planned to read in my last “This ‘Week’s’ Books” post, I read all except one. As you can see, the four books on top, in the pictures, are also on my list of completed books, including N. T. Wright‘s Matthew for Everyone–Part One (finally!). 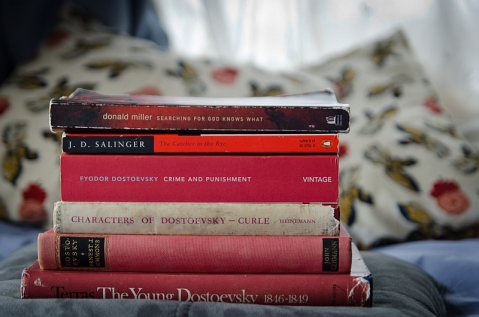 I read the Crime and Punishment section in Characters of Dostoevsky: Studies from Four Novels by Richard Curle, but didn’t read the entire book as the rest of the book (as the title suggests) deals with other Dostoevsky novels. I’m still reading Dostoevsky: the Making of a Novelist by Ernest J. Simmons. It’s a fascinating read, but difficult, as I’m trying to mainly read the parts that pertain to Dostoevsky, the man and writer, and the parts that specifically relate to Crime and Punishment without reading spoilers or parts that pertain to his other novels. It’s harder than I thought it would be.

The one book I didn’t read was The Young Dostoevsky (1846-1849): A Critical Study by Victor Terras; I didn’t even crack it open. I plan on reading it once I’ve finished reading Ernest J. Simmon’s Dostoevsky book.