It’s been ages since I’ve done one of these, but I’m hoping to resurrect my “This Week’s Books” posts again. Here’s a peek at the books I’ve been reading and plan to read in the next few weeks. 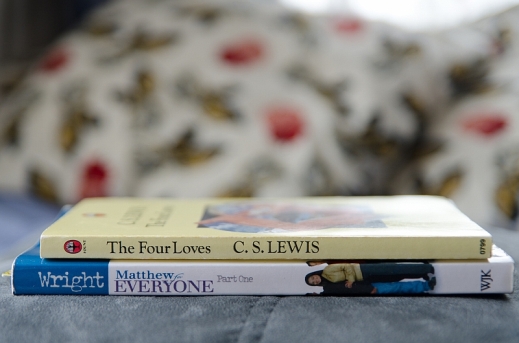 I find it amusing that the red color theme just happens to coincide perfectly with Valentine’s day. You could say The Four Loves fits the Valentine’s Day theme too. 🙂

The complete list looks something like this:
The Four Loves by C. S. Lewis
Matthew for Everyone–Part One by N. T. Wright
Searching for God Knows What by Donald Miller
The Catcher in the Rye by J. D. Salinger
Crime and Punishment by Fyodor Dostoevsky
Characters of Dostoevsky: Studies from Four Novels by Richard Curle
Dostoevsky: the Making of a Novelist by Ernest J. Simmons
The Young Dostoevsky (1846-1849): A Critical Study by Victor Terras

As you can see, right now, I’m focusing on Dostoevsky. I’ve finished Crime and Punishment, but it’s on the list because I’m re-reading parts and comparing my Richard Pevear and Larissa Volokhonky translation with the Constant Garnett translation that appears in the books I’m reading on Dostoevsky.

Speaking of lists, I’m ashamed to say, N. T. Wright’s Matthew for Everyone–Part One is still on the list. It’s been on every “This Week’s Books” post so far. 😦 Obviously, I haven’t made it a priority. I’m determined to have moved on to Part Two, by my next “This Week’s” post.

This site uses Akismet to reduce spam. Learn how your comment data is processed.